Opinion and Thoughts About U.S. Reparation for Slavery By Dr. Gladys Turner Finney 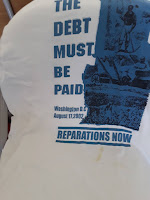 Reparation simply is a redress against a past wrong, grievance, injustice. The redress may be an acknowledgement, apology, monetary compensation to the victims, or other socio-economic benefits. The idea of reparation for slavery is not new. It dates back to Emancipation when the “freedmen” expected “forty acres and a mule” to help them make the transition from enslaved people to freedom which never materialized. Had Thaddeus Stevens prevailed there would have been a different outcome. I have a say-so on the matter. I am a descendant of slaves in the United States, the third generation post slavery. It may be controversial, non-scientific but so are other voices. I am “African-American” by DNA, history, and culture. The Grievance as I see it: For 246 years, 1619-1865, the United States engaged in the most barbaric slavery in world history that legalized Africans and their descendants as chattel property. It has failed to fully acknowledge or apologize for its complicity in a crime against humanity. The United States, its “white citizens” prospered from free labor which has never been compensated. My argument is the institution of slavery, Jim Crow, de jure and de facto discrimination, bred institutional-structural racism and some of the resulting consequences affecting present day African-Americans are generational poverty, the wealth gap with “white Americans,” and other disparities. Slavery in the United States created a hybrid people, no longer Africans. These enslaved people were never allowed to assimilate as “Americans,” with resulting effects on self-consciousness as reflected in the research studies of psychologists, Dr. Kenneth B. Clark and Dr. Dr. Mamie Phipps Clark. I do not support the counter arguments against reparation by those who oppose reparation 1. Slavery has no lasting effects on present day descendants of slaves. 2. The issue of reparation is divisive, polarizing: Citizens who were never slave holders should not be forced through the government to compensate descendants who were never slaves. 3. Racism is not responsible for African-Americans to be twice as likely to live below the poverty line than “white Americans.” But “lack of responsibility, sinful/immoral behaviors, they don’t work hard enough, don’t marry, have babies outside of wedlock.” 4. The government would not know who to compensate. There is no historical data base of United States slave descendants. I reject the counter argument and narrative that slavery, and ongoing racism do not affect the economic welfare of “African Americans” as a group. I reject the idea of “blaming the victims.” Or the idea reparation is not necessary because some African-Americans have done exceptional well against the odds. The debt still need to be paid. I partially agree the government would not know who to compensate. My slave ancestors did not come as immigrants through Ellis Island, but in shackles on slave ships. There is no historical data base. Not surprising! My people were considered non- human beings but property. But there is the possibility of extrapolation and census records. How does anyone know how I have been affected or anyone like me who cannot trace their ancestors back to their homeland because they were stripped of their name, identity, their heritage? I do not remember anyone asking or anyone caring. There is a lot of denial in the United States. Denial of racism, Denial of “white privilege.” Expectation when you African- American that the “auto back wheels should catch up with the auto front wheels.” Denial that regardless of education or profession African-Americans make less than their white peers. Denial of how government programs after World War II enabled the development of the “white middle class, such as the GI BILL and FHA which often discriminated against African-Americans. The Redress: 1. Passage of HR 40 for a Federal Commission to explore reparations for descendants of U.S. Slavery is the first step. 2. Acknowledgement and apology for U.S. complicity in the Transatlantic-Atlantic slave trade. 3. An accurate rewriting of history of slavery in the United States and dissemination. And re- education of current day population about slavery and Jim Crow. 4. Collective monetary compensation paid to Historical Black Colleges and Universities, and expanded STEM Programs. On August 11, 2002, I attended the Reparation Rally in Washington, D.C. I applaud the late Congressman John Conyers Jr., Representative Shelia Jackson Lee and others who have continued to work for reparative justice.
Posted by GT Turner Finney at 8:38 AM No comments:

The Joseph Carter Corbin Memorial Scholarship at Ohio University was established to honor the life and work of Dr. Joseph Carter Corbin, a distinguished alumnus of Ohio University during the mid 19th century, born in Chillicothe, Ohio to former enslaved parents. Dr. Corbin is the founder of the University of Arkansas at Pine Bluff and the father of higher education for African-Americans in Arkansas. He was the first African-American to be elected Superintendent of Education in the state of Arkansas during the Reconstruction Period. The scholarship, established by Dr. Gladys Turner Finney in 2015, will assist students in the College of Arts and Sciences. A tax-deductible donation may be given on line at: Ohio.edu/give: Click on 'give now.' There is a button that says 'I want to support.' Scroll down to 'College of Arts and Sciences. Click 'Select Fund Designation.' Scroll down to Joseph Carter Corbin Scholarship. By Mail: The Ohio University Foundation, P. O. Box 869, Athens, Ohio 45401-9917 (Joseph Carter Corbin Scholarship in check memo). More information Joseph Carter Corbin:http//:encyclopediaofarkansas.net/entries/joesph-carter-corbin-1624/
Posted by GT Turner Finney at 9:02 AM 1 comment: 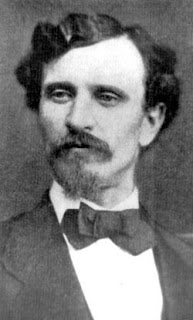 Political violence, suppression of African-American vote to gain/retain political office and power has long roots in U.S. History. Kenneth C. Barnes describes political violence as "the illegal use of force to keep or increase one's power." Case in point, the Election of 1888 in Plumerville, Conway County, Arkansas. Armed, masked white men intimidated voters and "stole at gunpoint the Plumerville ballot box, which contained the majority of the county's Black Republicians vote." John Middleton Clayton, a Republican politician/legislator from Pine Bluff (Jefferson County), who had migrated to the state from Pennsylvania during Reconstruction ran for a seat in the U.S. House of Representatives against incumbent, Clifton R. Breckinridge, a Democrat. Clayton lost the electon by a narrow margin, contested the election and went to Plumerville to investigate. On the evening of January 29, 1889 he was was assassinated at a local boarding house. After state and federal investigations, Clayton was declared the winner of the election. John Middleton Clayton was the brother of Arkansas Governor and U.S. Senator, Powell Clayton. He represented Jefferson County Arkansas from 1871-1873 in the Arkansas House of Representatives and State Senate. He also held the position of sheriff in Jefferson County. He was a contemorary of Joseph Carter Corbin, State Superintendent of Public Instruction, elected in 1872 and President of the Board of Trustees of Arkansas Industrial University, now the University of Arkansas at Fayetteville. They were members of the same political party. Some sources suggest they were friends. John Middleton Clayton served on the first Board of Trustees of Arkansas Industrial University when it was charted in 1871. Senator John Middleton Clayton authored the bill in the Arkansas Senate (1873) that authorized the Arkansas Industrial University to establish Branch Normal College under the care and management of the Board of Trustees. Joseph Carter Corbin opened Branch Normal College, now the University of Arkansas at Pine Bluff, on September 27, 1875 in Pine Bluff with seven students. Sources: Who Killed John Clayton? by Kenneth Barnes Encyclopedia of Arkansas Wikipedia Joseph Carter Corbin, Educator Extroardinaire by Gladys Turner Finney
Posted by GT Turner Finney at 2:28 PM No comments:

Preface
Researching my Bluford and Turner families was a labor of love. It was my intent
to connect my family from 1870 when African-Americans first appeared in U.S.
Population Census, by name, to my generation. And, so I have done. Perhaps, more
research could have been done, were resources available, as seen on popular television
programs: African-American Lives, Who do you think you are, Researching Your
Roots.

Only one branch of the Bluford Family was researchable and that was George Bluford,
my maternal great grandfather, who was born in South Carolina about 1866, migrated
to Louisiana, and eventually to Arkansas about 1909.

I can only imagine how great the the research was hindered by lack of the 1890
Federal Population Census, destroyed by fire. The disconnect of 20 years 1880 to
1900 is a very long time in the lives of families. Many were lost, died or disappeared.
My disappointment was the inability to connect with present day descendants of
other lines of the Bluford Family.

The oldest family member found on the Bluford Family Tree was Betsey Simkins,
born about 1820 in South Carolina, 200 years ago.

I had the good fortune to know 3 of 4 of my grandparents and 4 of my great
grandparents. This is a blessing when one consider the impact of slavery on the
African-American family. I represent the third generation post slavery.

Biography of James "Jim" Bluford
James, "Jim" Bluford is believed to have been born in the state of South Carolina.
The county of his birth is unknown. He is the earliest known progenitor of my Bluford
family. His birth may have been, 1830, 1832 or 1840. His parents and siblings are
unknown, as well as any events pertaining to their lives, birth or death. His wife
Mary Bluford's maiden name is inferred to have been Simkins, based on her mother's
name, Betsey Simkins.

In 1870, James and Mary, according to the Federal Population Census for South Carolina,
lived in Saluda Division, Edgefield County South Carolina with their children, Jessie 14;
Harry or Horry, 12, Emma 10; Jim 8; Will 6; and George 4.

Mary Bluford was born about 1840 in South Carolina. There is no history of her family. In
the 1900 Louisiana Federal Population census, she is recorded as "Mary Bliffard," a sixty
year old widow, living in Madison Parish, Ward 4 with her son, his wife Savannah, and two
grandsons, Ebbie and James Bluford. The census worker reported that she was the mother
of thirteen children but only four were still living. George Bluford and his descendants
are the only known descendants of James, "Jim," Bluford and Mary Simkins Bluford.

It is unknown when and under what circumstances the Bluford Family migrated to
Louisiana from South Carolina and what family members migrated with them. It
seems that James "Jim" Bluford is deceased by the time of the 1900 Louisiana Census.
He is not reported as part of the family. It is also unknown if any other Bluford family
members migrated to Lincoln County Arkansas in 1907 with George Bluford besides his
nuclear family.

Not until 2019, I learned a Bluford Plantation existed in Pineville, St Stephens Parish,
now Berkeley County. The Bluford Plantation dated back to the 1700s, owned by
Philip Williams and later purchased by Peter Sinkler. Peter Sinkler died childless and
left the plantation to his sister, Elizabeth Sinkler Dubose and or/her son, William Dubose.
Julian Dubose was the next owner. In 1903 the house was purchased and developed into
a Hunt Club.  Library of Congress (HABS-SC-236. South Carolina Historical Society.

Posted by GT Turner Finney at 10:12 AM No comments:

GT Turner Finney
Sexagenarian+ in the process of self-reinvention. Trying to become a Centenarian. Have a passion for telling stories, mine and others. Slogan: "Participate in the great symphony of life. "Prepare social work scholars for the future."